[L. uterus, womb]
The reproductive organ for containing and nourishing the embryo and fetus from the time the fertilized egg is implanted to when the fetus is born.
SYN: SEE: womb 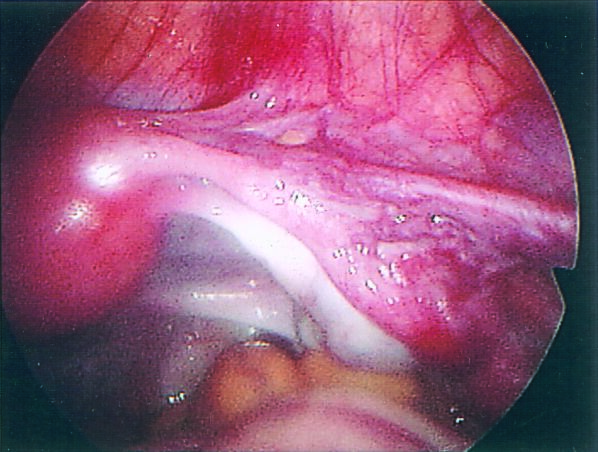 ANATOMY
The uterus is a muscular, hollow, pear-shaped organ situated in the midpelvis between the sacrum and the pubic symphysis. Before childbearing, it is about 3 in (7.5 cm) long, 2 in (5 cm) wide, and 1 in ( 2.5 cm) thick. Its upper surface is covered by the perimetrium, and it is supported by the pelvic diaphragm supplemented by the two broad ligaments, two round ligaments, and two uterosacral ligaments. It is usually tilted forward over the top of the urinary bladder. The upper portion of the uterus, between the openings of the fallopian tubes, is the fundus; the large central portion is the body; and the narrow lower end is the cervix, which projects into the vagina. The cavity of the uterus is widest in the fundus. The canal of the cervix is narrow, opens into the uterine cavity at the internal os, and into the vagina at the external os.

The wall of the uterus consists of the outer perimetrium, middle myometrium, and inner endometrium. The uterine and ovarian arteries supply blood to the uterus.

A uterus without a cervix.

A uterus with a depressed arched fundus.

A uterus in which the fundus is divided into two parts.

A uterus in which the external os is divided into two parts by a septum.

A uterus in which the cavity is divided into two parts by a partition.

A uterus in which the body is partially divided by a median septum.

A congenital anomaly in which abnormalities in the formation of the müllerian ducts result in a duplication of the uterus, a uterus with a divided cavity, or sometimes, two copies of the cervix or vagina.
SYN: SEE: dimetria; SEE: uterus didelphys

A double uterus resulting from failure of union of müllerian ducts.

A uterus that is retarded in development and possesses an extremely long cervical canal.

The uterus of a woman who serves as a surrogate mother for a couple who wants their fertilized egg carried to term.

A normal uterus with a disproportionately small cervix.

An adult uterus that resembles that of a prepubertal female.

Malposition of the uterus, and for symptoms thought to arise from that condition.

A uterus possessing only one lateral half and usually having only one uterine tube. About 20% to 30% of women who have this structural abnormality also experience repeated spontaneous abortion during early pregnancy.

uterus is a sample topic from the Taber's Medical Dictionary.