Immunity developed either after exposure to an antigen or to the passive injection of immunoglobulins.

Immunity resulting from the development within the body of antibodies or sensitized T lymphocytes that neutralize or destroy the infective agent. This may result from the immune response to an invading organism or from inoculation with a vaccine containing a foreign antigen.
SEE: immune response; SEE: vaccination

The component of immunity that is pathogen specific and creates memory. It consists of the mechanisms of cell-mediated and antibody-mediated immunity.
SEE: innate immunity

ABBR: CMI The regulatory and cytotoxic activities of T cells during the specific immune response. This process requires about 36 hr to reach its full effect.
SYN: SEE: T-cell-mediated immunity 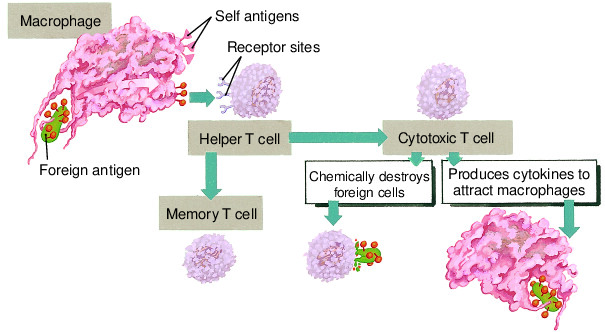 CELL-MEDIATED IMMUNITY ; SEE: humoral immunity
Unlike B cells, T cells cannot recognize foreign antigens on their own. Foreign antigens are recognized by antigen-presenting cells (APCs) such as macrophages, which engulf them and display part of the antigens on the surface of the APCs next to a histocompatibility or autoantigen (macrophage processing). The presence of these two markers, plus the cytokine interleukin-1 (IL-1) secreted by the APCs activates CD4 helper T cells (TH cells), which regulate the activities of other cells involved in the immune response.

CMI includes direct lysis of target cells by cytotoxic T cells, creation of memory cells that trigger a rapid response when a foreign antigen is encountered for the second time, and delayed hypersensitivity to tissue and organ transplants. T cells also stimulate the activity of macrophages, B cells, and natural killer cells. These functions are controlled largely by the secretion of lymphokines such as the interleukins, interferons, and colony-stimulating factors. Lymphokines facilitate communication and proliferation of the cells in the immune system.

Immunity to cancer metastasis or parasitic reinfection produced by an established antigenic source in the body, e.g., a primary tumor or an ongoing infection. In the case of parasites, for example, infection by adult forms of the organism may stimulate an immune response that prevents larvae from reinfecting the host.

Immunity present at birth. It may be natural or acquired, the latter depending on antibodies received from the mother's blood.

The ability of a community to resist epidemic disease. Herd immunity may develop naturally in a society as a result of widespread exposure to disease, or it may be stimulated artificially by mass vaccination programs.

PATIENT CARE
Members of every region or community should be alerted to local or widespread communicable diseases for which vaccination is available. Offering public immunization sessions through local health departments, schools, colleges and places of business, as well as public and private health care agencies will increase the percentage of people who are vaccinated and will decrease the risk of communicable disease epidemics.

The protective activities of antibodies against infection or reinfection by common organisms, e.g., streptococci and staphylococci. B lymphocytes with receptors to a specific antigen react when they encounter that antigen by producing plasma cells (which produce antigen-specific antibodies) and memory cells (which enable the body to produce these antibodies quickly in the event that the same antigen appears later). B-cell differentiation also is stimulated by interleukin-2 (IL-2) secreted by CD4+ T cells and foreign antigens processed by macrophages.
Antibodies produced by plasma B cells, found mainly in the blood, spleen, and lymph nodes, neutralize or destroy antigens in several ways. They kill organisms by activating the complement system, neutralize viruses and toxins released by bacteria, coat the antigen (opsonization) or form an antigen-antibody complex to stimulate phagocytosis, promote antigen clumping (agglutination), and prevent the antigen from adhering to host cells. 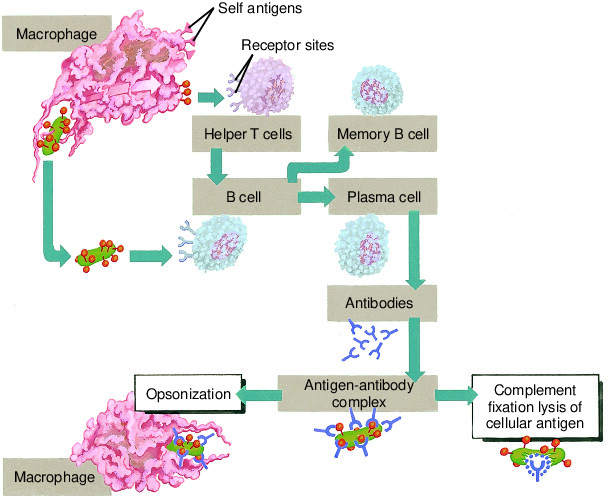 Any of those immune defenses against infection and cancer that are not determined by the specific responses of B or T lymphocytes. Innate immunity is not pathogen specific and does not create immunological memory. It includes the actions of adhesion molecules, cellular chemotaxis, the secretion of cytokines, cytotoxicity, the activities of dendritic and natural killer cells, inflammation, and phagocytosis.
SYN: SEE: innate immune system

Immunity limited to a given area or tissue of the body.

Immunity that is genetically determined in specific species, populations, or families. Some pathogens cannot infect certain species because the cells do not provide suitable environments. For example, the measles virus cannot reproduce in canine cells and therefore dogs have natural immunity to measles.

Immunity acquired by the introduction of preformed antibodies into an unprotected individual. This can occur through intravenous infusion of immune globulin or from antibodies that pass from the mother to the fetus through the placenta in utero. Newborns also may acquire immunity through breastfeeding.

Immunity resulting from the development of antibodies against an infection accompanied by complete elimination of the infectious agent from the body.

The progressive loss of protective antibodies against an antigen or disease that occurs with the passage of time. It is a crucial factor in vaccination. Booster doses of a vaccine are given when the immune response to an antigen drops below protective levels.

immunity is a sample topic from the Taber's Medical Dictionary.