The organ of hearing and equilibrium. It consists of outer, middle, and inner portions, and it is innervated by the eighth cranial nerve. 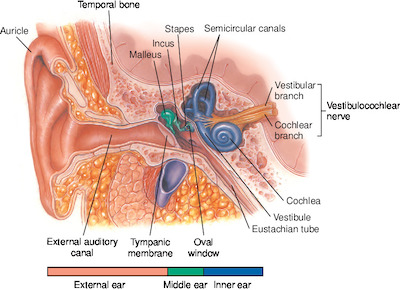 STRUCTURE OF THE EAR
The pathway of hearing is as follows: the auricle funnels sound waves from the environment through the external auditory canal to the tympanic membrane, which makes this thin epithelial structure vibrate. The vibrations are transmitted to the auditory ossicles and then to the perilymph and endolymph. The receptors are part of the organ of Corti and generate impulses transmitted by the cochlear branch of the eighth cranial nerve to the spiral ganglion and auditory tracts of the brain. The auditory areas are in the temporal lobes.

The healthy human ear responds to a variety of sounds, with frequencies ranging from about 20 to 20,000 Hz. It is most sensitive, however, to sounds whose frequencies fall in the 1500- to 3000-Hz range, the frequency range of most human speech.
SEE: hearing

An ear without a lower lobe.

A thickening of the external ear resulting from trauma. It is commonly seen in boxers. Plastic surgery may restore the ear to a normal shape.

That part of the ear consisting of the auricle and external auditory canal, and separated from the middle ear by the tympanic membrane or eardrum.
SYN: SEE: auris externa; SEE: outer ear

Objects that enter the ear accidentally or are inserted deliberately. These are usually insects, pebbles, beans or peas, cotton swabs, or coins.

SYMPTOMS
Foreign objects cause pain, ringing, or buzzing in the ear. A live insect usually causes a noise.

TREATMENT
Water must not be introduced if any vegetable matter is in the ear because the water may push the foreign body further into the ear or cause the matter to swell and become firmly embedded.

To remove insects from the ear, a few drops of lidocaine should be instilled. Inorganic foreign bodies can be removed with small forceps by a health care provider.

The chronic accumulation of a viscous exudate in the middle ear, occurring mostly in children between 5 and 8. It causes deafness, which can be treated by removal of the exudate.

That part of the ear consisting of the cochlea, the vestibule, and the bony semicircular canals, which contain the receptors for static and dynamic equilibrium. The receptors are innervated by the vestibulocochlear nerve.
SYN: SEE: auris interna; SEE: internal ear 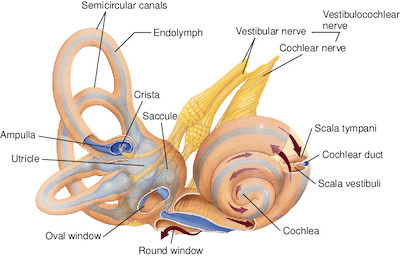 STRUCTURE OF THE INNER EAR

air-filled space within the petrous part of the temporal bone that is connected to the nasopharynx by the auditory tube and is separated from the external auditory meatus by the tympanic membrane. Sound is transmitted through the middle ear as vibrations along a chain of three tiny bones (the auditory ossicles).
SYN: SEE: auris media; SEE: tympanic cavity
SEE: eardrum; SEE: tympanum

An earlobe that has been pierced with a needle so that a permanent channel will remain, permitting the wearing of an earring attached to the ear by a connector that passes through the channel.

The formation of an exostosis in the external auditory canal of surfers, esp. those who habitually surf in colder waters.

A type of external otitis seen in swimmers, usually during the summer. It is typically caused by Staphylococcus aureus or Pseudomonas aeruginosa and is treated with a suspension of neomycin, polymyxin B sulfate, and hydrocortisone.

ear is a sample topic from the Taber's Medical Dictionary.