1. A pathway, course, or channel.
2. A bundle of parallel axons in the central nervous system (CNS) that runs along a stereotyped course from a common originating area to a common termination area.
3. A group of organs or parts that form a continuous pathway.

The anatomic region in the oral cavity and throat through which both air and food pass.

Any axon tract that carries information toward a particular target area.

An axon tract running rostrally in the spinal cord or brain, often a sensory pathway.

The organs and ducts through which bile travels on its way to the duodenum. These are the bile canaliculi, right and left hepatic ducts, common hepatic duct, gallbladder, cystic duct, bile duct, and hepatopancreatic ampulla.
SEE: bile ducts; SEE: gallbladder; SEE: liver 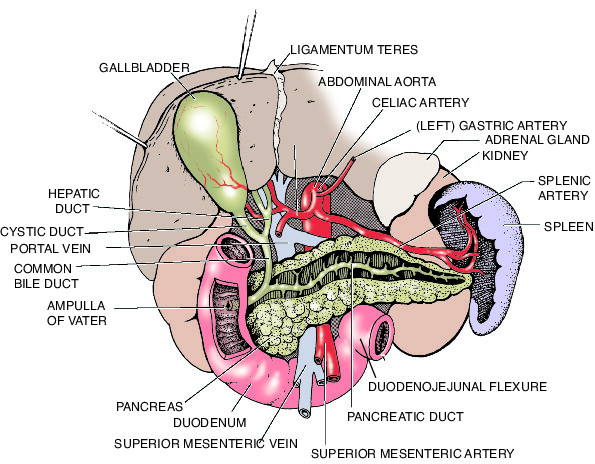 BILIARY TRACT (IN RELATION TO LIVER, PANCREAS, AND DUODENUM)

An axon tract connecting the subthalamus and the midbrain reticular formation with the inferior olivary nucleus.

An axon tract from the motor cortex that innervates the reticular formation and the cranial nerve nuclei in the hindbrain.

An axon tract from the frontal, parietal, and occipital cortices that innervates the hypothalamus.

An axon tract originating in the external cuneate nucleus and synapsing in the ipsilateral cerebellum.

Any axon tract running caudally in the spinal cord or brain, often a motor pathway.

The continuous set of tubes that move food from the mouth to the anus.
SYN: SEE: alimentary tract

Any axon tract that carries information away from a particular target area.

A tract that passes from the cerebral cortex of the frontal lobe through the internal capsule and cerebral peduncle to the pons.

The esophagus, stomach, and intestines.

The genital and urinary tracts together.
SYN: SEE: urogenital tract

A thickened band in the deep fascia along the lateral thigh (the fascia lata) that extends from the tubercle of the iliac crest to the lateral condyle of the tibia. The iliotibial tract is an aponeurosis shared by both the gluteus maximus and tensor fasciae latae muscles.

In the heart, myocardial tissue in the right atrium that preferentially carries sinoatrial impulses to the left atrium, to the intra-atrial septum, or to the atrioventricular node.

The small and large intestines.

An axon tract originating in the mammillary body and synapsing in small nuclei near the caudal end of the midbrain tegmentum.

An axon tract originating in the mammillary body and synapsing in the anterior nucleus of the thalamus. The mammillothalamic tract is part of the limbic system.
SYN: SEE: Vicq d'Azyr tract

mesencephalic tract of the trigeminal nerve

A white ribbon-like band along the bottom (orbital) surface of each frontal lobe, composed of axons from the mitral cells in olfactory bulb. These axons terminate in the piriform cortex (the primary olfactory cortex) at the base of the cerebral hemisphere.

An axon tract running transversely (as opposed to longitudinally) in the hindbrain from the inferior olivary nucleus to all parts of the cerebellum via the inferior cerebellar peduncle.

The corticobulbar and corticospinal tracts, which are the major direct outputs of the motor cortex. In cross-sections of the hindbrain, the pyramidal tract has a triangular shape.

The retinal ganglion cell axons from the optic nerves that leave the optic tract at the optic chiasm to innervate the suprachiasmatic nucleus (in the hypothalamus), which contains the pacemaker cells for circadian rhythms.

An axon tract originating in the red nucleus of the midbrain. After leaving the red nucleus, axons cross to the contralateral side and descend into the spinal cord, where they terminate in the anterior horns. The red nucleus is innervated by axons from the motor cortices and the cerebellum, and the rubrospinal pathway is an extrapyramidal route to the spinal cord. A major function of rubrospinal axons is to set and adjust the muscle tone in the flexor muscles.

Any axon tract, usually traveling rostrally in the CNS, that transmits information related to somatic or visceral sensation.

spinal tract of the trigeminal nerve

The dorsal or the ventral spinocerebellar tract.

supraopticohypophysial tract A tract of fibers arising from cell bodies located in supraoptic and paraventricular nuclei of the hypothalamus and terminating in the posterior lobe of the hypophysis.

A nerve tract that passes from the tectum of the midbrain through the medulla to the spinal cord. Most of the fibers cross to the other side of the body.

The esophagus, stomach, and duodenum.

The channel followed by urine in the body, from the glomeruli in the kidneys through the ureters, bladder, and urethra.

The vascular and pigmented tissues that constitute the middle layer of the wall of the eye. The tract comprises the iris, ciliary body, and choroid.
SYN: SEE: vascular tunic of the eye

An axon tract originating in the contralateral dorsal and intermediate horns of the lower spinal cord, from the coccygeal through the lumbar segments. The tract runs in the lateral funiculus of the spinal cord, recrosses the midline, and terminates in the ipsilateral vermis of the cerebellum. It conveys proprioceptive information from the body to the cerebellum.
SYN: SEE: anterior spinocerebellar tract

tract is a sample topic from the Taber's Medical Dictionary.