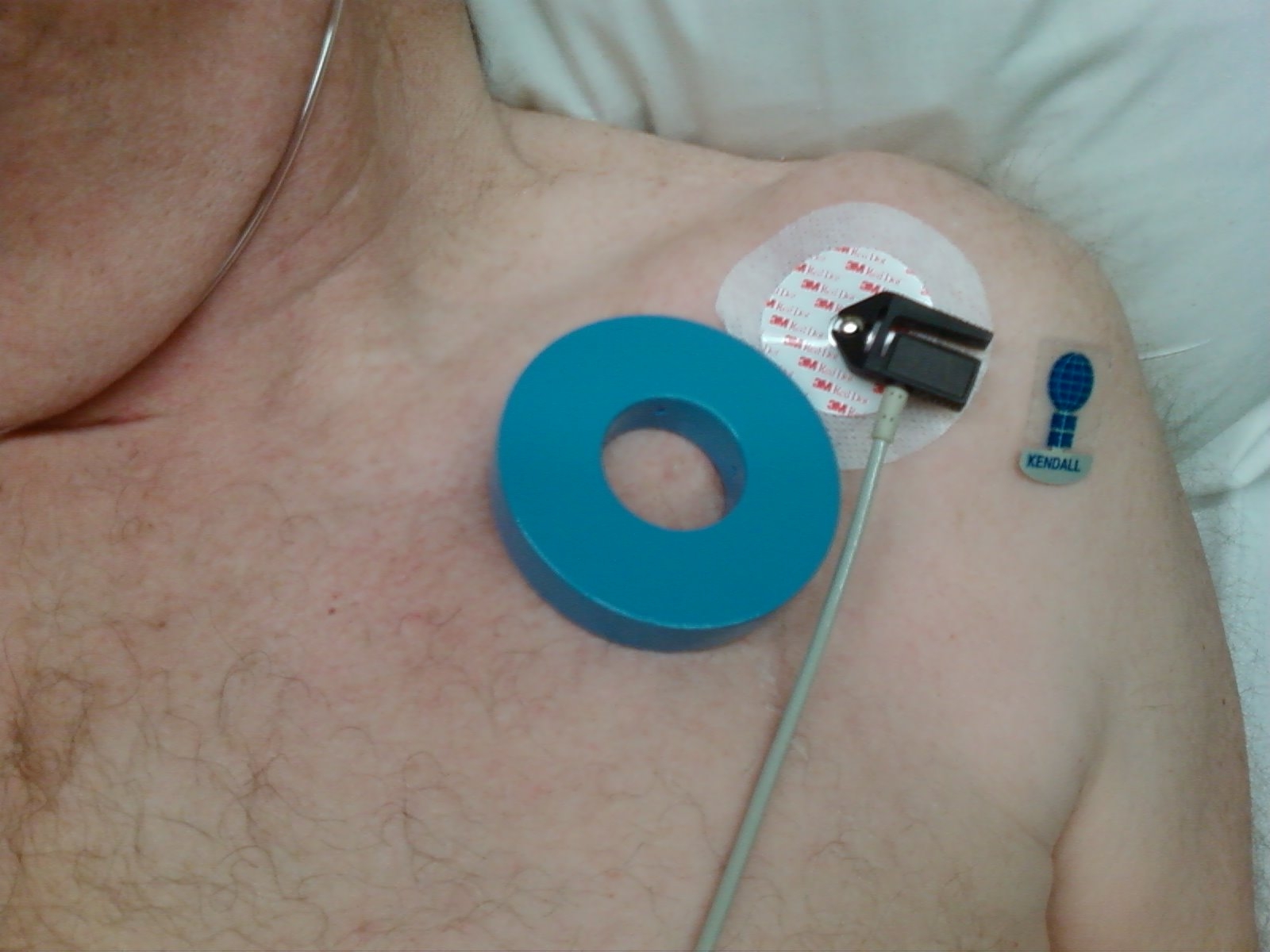 PACEMAKER A magnet placed directly on top of a pacemaker, to check its function 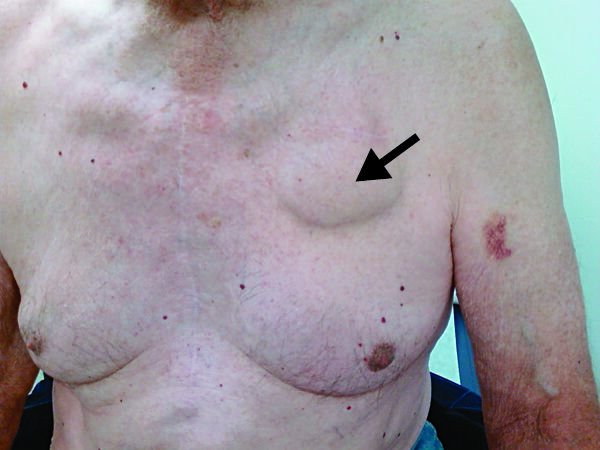 PACEMAKER Pacemaker defibrillator beneath the skin
All artificial cardiac pacemakers have a pulse generator (a device that gives off an electrical impulse at prescribed intervals), electrical leads (which transmit the impulse to the myocardium), and a battery (usually made of lithium iodide) encased in titanium and implanted surgically in a subcutaneous pocket (usually in the chest). The pacing leads are threaded through a subclavian vein into the right heart, with the primary lead placed in the ventricle, and the second lead (if required) in the atrium. For biventricular pacing, a third lead is placed in the left ventricle. A biventricular pacemaker also may have a built-in cardiovertor-defibrillator. Pacemakers typically have the ability to pace the ventricle, the atrium, or both; to sense electrical discharges coming from cardiac chambers; and to respond to sensed beats. Most pacemakers in the U.S. also are programmable, and many are rate responsive. The features of each pacemaker are identified in its three- to five-letter NASPE/BPG code (developed and revised by the North American Society of Pacing & Electrophysiology and the British Pacing & Electrophysiology Group). The five positions describe the pacer's functions as follows:Thus a pacemaker with the letter I in position 3 of its code will inhibit firing when it senses an intrinsic beat but will pace the cardiac chamber if no beat is sensed. The letter D in position 5 indicates that both atria and both ventricles are paced, with the left and right chambers stimulated simultaneously to maintain coordination and thus improve cardiac output. When the pacemaker has a rate modulation feature (R in position 4), also known as an adaptive rate mechanism, it works to copy the abilities of a normally functioning heart, such as detecting exercise and triggering pacer rate acceleration to meet the increased metabolic need. Other pacemaker features include hysteresis, which delays unnecessary pacing (which can harm the right ventricle), and allows the patient's intrinsic impulse to provide an atrial kick, which stokes the ventricle and increases cardiac output by 15% to 30% over a beat without atrial kick. Pacers with a rate-smoothing algorithm limit heart rate changes to a programmed percentage from one beat to the next, allowing the heart rate to increase or decrease more slowly and providing time for the body to adjust the stroke volume as it would normally in such situations.

PATIENT CARE
After pacemaker implantation, follow-up care is provided to ensure that the device is working optimally. A chest x-ray confirms correct placement of the leads and also can identify some complications, such as pneumothorax. Since pacemakers are usually implanted under moderate sedation and analgesia, the patient may still be drowsy on return to the unit from recovery; however, he or she should arouse easily and be able to answer questions and follow commands. Supplemental oxygen is provided (nasal cannula or mask) until the patient is fully awake and his or her oxygen saturation has returned to baseline. Immobilizing the patient's shoulder and arm on the operative side with a sling or ace-wrap for 24 to 48 hr limits movement that could dislodge the tip of the pacing electrode(s) from the endocardial wall, preventing sensing of intrinsic beats or needed pacing. The incision is assessed for bleeding, infection, and incisional discomfort, which is controlled with prescribed analgesia. The patient is assessed for chest pain, palpitations, dizziness, shortness of breath, hiccuping, and a sensation of pacing in the abdomen, and the cardiologist or surgeon notified if any of these occur. The chest x-ray is usually repeated the following day to document positioning and rule out pneumothorax. Pacer function is checked, and the patient discharged with instructions for activity restrictions and further care. Follow-up care typically includes monitoring the performance of the pacemaker, either in the cardiologist's office or by telephonic link-up to ensure, for example, that the pulse generator is triggering a heart rate that is appropriate for the patient's needs, that the leads are working, and that the battery's strength is adequate.

Health care professionals should ascertain the type of pacemaker employed and expectations for its function based on its NASPE/BPG code; monitor the cardiac rate and rhythm for evidence of pacemaker function; assess the patient for evidence of pacemaker failure or noncapture (vertigo, loss of consciousness, hypotension, chest discomfort, dyspnea) and evaluate the patient for effects on cardiac output; teach the patient the technique and rationale for monitoring his or her own pulse rate and for care and protection of insertion site; and counsel concerning telephone monitoring check-up, battery replacement, medication regimen, physical activity, and follow-up care. Health care professionals should encourage the patient to wear or carry medical identification and information indicating the presence and type of pacemaker implanted, along with an electrocardiogram rhythm strip showing pacemaker activity and capture.

A pacemaker that stimulates breathing by delivering electrical pulses to both phrenic nerves from an external radio transmitter to an implanted receiver. It is used in patients with quadriplegia or sleep apnea.
SEE: radiofrequency electrophrenic respiration

A rate-adaptive artificial cardiac pacemaker. It senses and paces both atrial and ventricular events, triggering the atrioventricular (AV) interval so that AV synchrony is maintained over a wide range of heart rates. This type of pacing has reduced the incidence of pacemaker syndrome. It is the most versatile pacing device used.
SEE: pacing code; SEE: pacemaker syndrome

An artificial cardiac pacemaker that senses both atrial and ventricular events but can inhibit only atrial impulses. This type of pacing is used only when atrioventricular conduction is intact. It may be suitable when frequent atrial tachyarrhythmias cause rapid ventricular rates.

An artificial cardiac pacemaker designed to permit its electrical output to be inhibited by the heart's electrical impulses. This decreases the chances for the pacemaker to induce discomfort or dysrhythmias.

Any endogenous cardiac pacemaker other than the sinoatrial node.

An artificial cardiac pacemaker that stimulates the heart at a predetermined rate.

An artificial cardiac pacemaker implanted directly into the right ventricular apex. Unlike conventional pacemakers, which use wires to carry electrical signals from a surgically-implanted pulse generator placed in the upper chest, a leadless pacemaker is anchored directly into the heart by a catheter that ferries the device there from an artery.

An artificial cardiac pacemaker for permanent cardiac pacing. The leads are usually inserted transvenously through the subclavian or cephalic veins with leads positioned in the right atrium for atrial pacing or in the right ventricular apex for ventricular pacing. The leads are connected to the pulse generator, which is implanted in a subcutaneous pocket below the clavicle.

A permanent artificial cardiac pacemaker in which one or more settings can be changed electronically.

An artificial cardiac pacemaker that senses changes in the body's need for adjustment of the cardiac rate as can occur in sleeping, waking, sitting, walking, or running. The device alters cardiac rate by sensing body motion, changes in breathing, or slight changes in blood temperature, which improves the quality of life for active patients. It is also called a rate-adaptive pacemaker.

An artificial cardiac pacemaker for temporary cardiac pacing, as during cardiac surgery and emergencies. The device consists of an electrode catheter inserted transvenously in the right ventricular apex that receives impulses from an external generator.

An artificial cardiac pacemaker that is located outside the body. The electrodes for delivering the stimulus are located on the chest wall.
SYN: SEE: transthoracic pacemaker

A cardiac arrhythmia in which the site of origin of the pacemaker stimulus shifts from one site to another, usually from the atrioventricular node to some other part of the atrium.

pacemaker is a sample topic from the Taber's Medical Dictionary.