[L. aspergere, to sprinkle]
A genus of fungi comprising more than 600 species of molds, some of which cause human disease. The principal human pathogens are Aspergillus fumigatus and, less often, A. flavus, A. nidulans, and A. niger.
SEE: aspergillosis

A species found in soil and manure. It can cause an occupational hypersensitivity pneumonitis known as malt worker's lung.

A species once thought to be the cause of tinea imbricata ringworm.

A species found on corn, peanuts, and grain. It is a plant, animal and human pathogen. After A. fumigatus, A. flavus is the second most common cause of aspergillosis of the lung. Other common clinical syndromes associated with A. flavus include chronic granulomatous sinusitis, keratitis, cutaneous aspergillosis, wound infections and osteomyelitis following trauma and inoculation. This species of Aspergillus can produce significant quantities of aflatoxin, a carcinogenic and acutely toxic compound.

The species that is the most common cause of aspergillosis in humans and birds. It is found in soil and manure.

A species with blue pigment found on dried fruit.

A species common in soil, causing one form of white mycetoma. 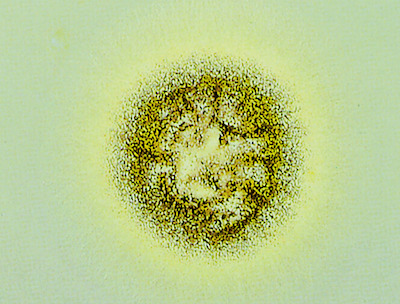 A species that produces the characteristic odor of brewing coffee.

A species that primarily causes invasive infections in immunocompromised hosts, e.g., patients being treated for leukemia or lymphoma. It is more resistant to antifungal medications than other Aspergillus spp.

A species that produces a mycotoxin called sterigmatocystin. A. versicolor has been reported as an agent of cutaneous disease, onychomycosis, otomycosis, osteomyelitis, and pulmonary disease.

Aspergillus is a sample topic from the Taber's Medical Dictionary.