ETIOLOGY
The causative virus is either influenza A (about 65% of cases) or influenza B (about 35% of cases). A negligible number of infections are caused by influenza C.

DIAGNOSIS
Influenza can be diagnosed by its clinical presentation, in combination with nasopharyngeal swabs or washes, or nucleic acid amplification tests.

COURSE
The incubation period of influenza is about 1 to 3 days, and the acute course of the illness typically lasts less than a week. Bacterial superinfection may occur, causing secondary pneumonias, sinusitis, or otitis media. Many patients lack energy and feel fatigued during their recuperation from acute infection.

CLASSIFICATION
The classification and naming of Influenza viruses depends on several elements: the nucleoprotein of the virus; the geographic location from which it is first isolated, its surface antigens, the year when it was first isolated in a laboratory, the adaptation of the virus to animals other than humans (such as birds, pigs, or horses), and its strain number.

Whether an influenza virus is called influenza A or influenza B depends on its nucleoprotein.

The location where the virus is first identified (the viral geographic source) is usually the name of a city, state, or country, e.g. Stockholm, Texas, Panama.

The next feature in the naming system is linked to the two proteins that the virus uses to enter into and explode out of infected cells in the respiratory tract. These proteins are hemagglutinin and neuraminidase, abbreviated H and N (or HA and NA). Fifteen hemagglutinins have been identified. Most of these infect water fowl, e.g., geese and ducks. Three of them are known to infect human beings. Several of them can infect both birds and human beings and other animals, e.g., swine.

When an animal cell is simultaneously infected with several influenza viruses, reassortment of viral genes can occur, and new viruses with new mixtures of disease-causing proteins can emerge. The influenza virus has eight major components, and pieces of one virus may link with pieces of others to form novel and occasionally deadly combinations. A virus that emerges from a pig (after it has been infected with an avian virus and a human virus) with parts that are mostly found in pigs is called a swine flu virus. Similarly, a virus that mutates on its own within a pig and becomes infectious to human beings is also called a swine flu virus.

Newly mutated and reassorted viruses appear fairly frequently around the world every year, which are carried by migrating birds from one place to another. Human beings can also carry influenza viruses rapidly around the globe if they travel while actively infected.

Public health data clearly have shown that about 30,000 people die of infection with influenza each year.

PREVENTION
Worldwide surveillance for new influenza antigens is an ongoing public health project; each year, updated vaccines are developed to counteract new strains of the disease. In the U.S., about 70 million people are vaccinated each year. Vaccination is offered in the late autumn, prior to the start of flu season. The trivalent vaccine offered is based on the previous year’s virus. Vaccination should be offered to people over 65 and individuals with underlying cardiac, pulmonary, renal, or hepatic disease, cancer, diabetes mellitus, and other chronic or debilitating illness, as well as all health care professionals. Vaccination of the general population prevents epidemic disease and prevents significant economic losses caused by employee absenteeism. Influenza vaccines are more than 70% effective in older adults and about 90% effective in younger recipients.

VACCINATION IN PREGNANCY
Women in the second and third trimesters of pregnancy are among the target groups for immunization: they, more than other members of the general population, should be recruited to receive influenza vaccination. Pregnant women with underlying heart, lung, or other chronic illnesses (such as diabetes mellitus) should receive influenza vaccination at any stage of pregnancy.

Recipients must be asked about hypersensitivity to eggs and egg products because some influenza vaccines are made from chick embryos; vaccines produced by other methods are preferable for these patients.

Children with influenza-like illnesses should avoid aspirin products because of the risk of Reye syndrome. All patients receiving influenza vaccines should review federally mandated Vaccine Information Sheets carefully before getting their injections.

TREATMENT
Influenza A virus is treatable with antiviral drugs. These agents have an impact on the duration of infection with either influenza A or B virus. Symptom-based treatment with acetaminophen, NSAIDs, cough remedies, e.g., such as dextromethorphan, an antitussive or guaifenesin, an expectorant, and other nonprescription remedies alleviate some of the misery the illness causes.

PATIENT CARE
Warm shower, baths, or heating pads help to relieve myalgias. All hospitalized patients should be protected from visitors who may have the flu (during flu season), and health care personnel should not provide patient care if they are ill or feel as if they may be coming down with flu. For the hospitalized patient, respiratory and blood and body fluid precautions are followed. Vital signs and fluid balance are monitored. Respiratory function is assessed for signs and symptoms of developing pneumonia, such as inspiratory crackles, increased fever, pleuritic chest pain, dyspnea, and coughing accompanied by purulent or bloody sputum. Prescribed analgesics, antipyretics, and decongestants are administered. Bedrest and increased oral fluid intake are encouraged, and intravenous fluids administered if prescribed. Oxygen therapy is administered if necessary. The patient is assisted to return to normal activities gradually. Nonalcoholic mouthwash or warm saline gargles are provided to ease throat soreness. The patient is taught proper cough etiquette and thorough hand hygiene to prevent spread of the virus. The patient treated at home is taught about all of the above supportive care measures as well as about signs and symptoms of serious complications to be reported.

Influenza caused by a variant strain of influenza virus type A.

ABBR: AI One of several influenza A viruses that primarily infects birds and poultry, and may occasionally cause a febrile illness in human beings. Symptoms in people include cough, muscle aches, sore throat and headache. Severe cases may cause viral pneumonia or acute respiratory distress syndrome. A pandemic of avian influenza (type H5N1) in the early 20th century killed millions of people worldwide.
SYN: SEE: bird flu

ABBR: HPAI Any genetic variant of avian influenza A that causes serious illness, or carries a high probability of death, in infected birds.

Any of several influenza A viruses that primarily infects cells that line the respiratory tracts of pigs. It can spread to humans or birds when a pig is infected with more than one strain of influenza at the same time and the nucleic acids from the separate species mix, forming a new, potentially dangerous combination.
SYN: SEE: swine flu 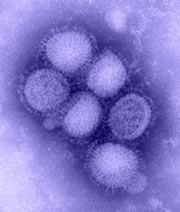 SWINE FLU
influenza is a sample topic from the Taber's Medical Dictionary.