1. A narrow tubular vessel or channel, esp. one that conveys secretions from a gland.
2. A narrow enclosed channel containing a fluid, e.g., the semicircular duct of the ear.

A duct of the pancreas leading into the main pancreatic duct or into the duodenum at the minor duodenal papilla.
SYN: SEE: duct of Santorini

A branch of a respiratory bronchiole that leads directly to the alveolar sacs of the lungs.
SEE: alveolus for illus 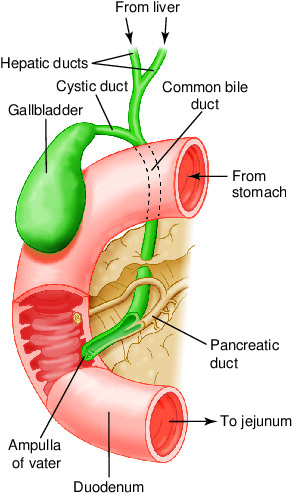 The duct that carries bile and pancreatic juice to the duodenum. It is formed by the union of the cystic duct of the gallbladder and the hepatic duct of the liver and is joined by the main pancreatic duct.
SYN: SEE: ductus choledochus
SEE: bile duct; SEE: biliary tract for illus

The secretory duct of the gallbladder. It unites with the hepatic duct from the liver to form the common bile duct.
SEE: biliary tract for illus

The duct that conveys sperm from the vas deferens and secretions from the seminal vesicle to the urethra.

Any duct that conveys a waste product from an organ, such as the collecting duct of the renal tubule.

Any of several short, narrow ducts that lie between the secretory ducts and the terminal alveoli in the parotid and submandibular glands and in the pancreas.

A duct passing between lobules within a gland, e.g., one of the ducts carrying bile.

The duct that originates in the left lobe of the liver, unites with the right hepatic duct to form the hepatic duct, and drains the left and caudate lobes.

Any of the small excretory ducts of the lacrimal glands.

Any of 15 to 20 ducts that drain the lobes of the mammary gland. Each opens in a slight depression in the tip of the nipple.
SYN: SEE: milk duct 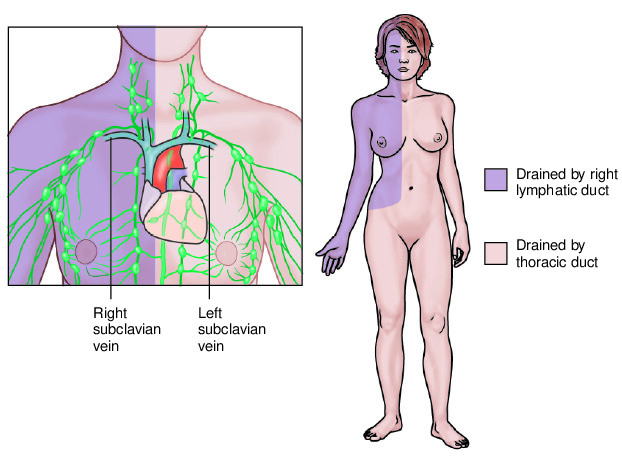 The duct that conveys pancreatic juice to the common bile duct and duodenum.
SYN: SEE: duct of Wirsung

Either of the bilateral embryonic tubes from which the uterine tubes, uterus, and vagina develop in the female but atrophy in the male.
SYN: SEE: Müller duct

A membranous duct that runs in the nasolacrimal canal and drains tears from the lacrimal sac to the nasal cavity. It opens beneath the inferior nasal concha.

Any of the large ducts formed by the uniting of the collecting tubules of the kidney; it empties into the renal pelvis.

The genital duct in the embryo. In females it develops into the oviducts, uterus, and vagina; in males it degenerates to form the appendix testis.

The duct leading from the parotid gland to the oral cavity.
SYN: SEE: Stensen duct

One of about 20 ducts that discharge prostatic secretion into the urethra.
SYN: SEE: ductus prostaticus

The duct that originates in the right lobe of the liver, unites with the left hepatic duct to form the hepatic duct, and drains the right right and caudate lobes.

Any of the ducts that drain a salivary gland.

Any of the smaller ducts of a gland.

One of a pair of embryonic ducts located between the visceral and parietal layers of the mesoblast on each side of the body.

One of three membranous ducts forming a part of the vestibular labyrinth of the inner ear. They lie within the semicircular canals and bear corresponding names: anterior, posterior, and lateral. The semicircular ducts originate from the utricle as a single common tube (crus communale). The three ducts then branch, and each follows the course of a different bony semicircular canal. At their far ends the ducts widen into an ampulla that contains a specialized endothelium that is sensitive to motion of the endolymph. Axons from receptor cells in these sensory epithelia transmit motion information to the brain via the vestibular division of the vestibulococchlear nerve (CN VIII).
SEE: labyrinth for illus.

Any of the ducts that convey sperm, specifically the ductus deferens and the ejaculatory duct.

Any of a class of ducts within the lobules of glands, esp. salivary glands, that contain radially appearing striations within the cells, denoting the presence of mitochondria.

Any of the secretory ducts of the sublingual gland.
SEE: Bartholin duct

A duct that conveys tears. These include secretory ducts of lacrimal glands, and lacrimal and nasolacrimal ducts.

The main lymphatic duct, originating at the cisterna chyli. It passes upward through the diaphragm into the thorax and continues upward along the aorta and esophagus to the neck, where it turns to the left and enters the left subclavian vein near its junction with the left internal jugular vein. It receives lymph from all parts of the body except the right side of the head, neck, thorax, and upper extremity.
SYN: SEE: alimentary duct
SEE: lymphatic system for illus

In the embryo, a duct that connects the thyroid diverticulum with the tongue. It sometimes persists as a postpartum anomaly, most often in the form of thyroglossal duct cysts.

A narrow duct emanating from the utricle, connecting it to the saccule, and opening into the endolymphatic duct of the inner ear.
SYN: SEE: ductus utriculosaccularis

In the embryo, the duct leading from the mesonephros to the cloaca. From it develops the ductus epididymis, ductus deferens, seminal vesicle, ejaculatory duct, ureter, and pelvis of the kidney.
SYN: SEE: mesonephric duct.

duct is a sample topic from the Taber's Medical Dictionary.