A canal of connective tissue through which the femoral artery, femoral vein, and saphenous nerve pass inside the lower half of the inner thigh between the femoral triangle and the popliteal fossa. The canal is surrounded by the vastus medialis, adductor longus, and adductor magnus muscles and is covered by the sartorius muscle.
SYN: SEE: Hunter canal; SEE: subsartorial canal

The digestive tract from the mouth through the anus.

In the skull, any of the two or three canals leading from small holes along the middle of the infratemporal surface of the maxilla. These canals transmit the posterior superior alveolar blood vessels and nerves, which supply the upper molars and their surrounding gums.
SYN: SEE: maxillary canal

In the embryo, the segment of the heart tube between the developing atria and ventricles. This segment eventually gives rise to the mitral and tricuspid valves and to portions of the interatrial and interventricular septa.

The canal comprising the cervix, vagina, and vulva, through which the products of conception, including the fetus, pass during labor and birth.

Any of several canals located in the bony labyrinth of the internal ear and enclosing the three semicircular ducts that open into the vestibule. They are enclosed within the petrous portion of the temporal bone.

The canal followed by the internal carotid artery and its accompanying sympathetic nerves as it passes through the bone of the skull. The carotid canal runs forward until, passing over the foramen lacerum, it turns up and opens into the middle cranial fossa along a groove at the base of the sella turcica.

The remnant of the lumen of the caudal aspect of the neural tube. It is largely obliterated in the adult spinal cord.

The canal through the center of the cervix.

A canal in the occipital bone of the skull for passage of the emissary vein from the transverse sinus. It opens anterior to the occipital condyle.

In the embryo, a temporary canal in the cartilage of the base of the sphenoid bone, enclosing the developing pituitary gland.

The open tubular canal from the pinna (auricle) of the ear to the tympanic membrane (ear drum). It is lined by thin, sensitive skin, which continues as the outer covering of the tympanic membrane. The medial two thirds is a bony canal in the temporal bone; the outer one third is cartilaginous. It contains hair and ceruminous glands.
SEE: external auditory meatus

A canal in the petrous portion of the temporal bone. The facial nerve passes through it.
SYN: SEE: aqueductus Fallopii

1. The medullary (central) canal inside the shaft of the femoral bone.
2. The most medial compartment of the femoral sheath. A femoral hernia is a bulge of intestine that has been pushed down into the femoral canal through its upper opening, the femoral ring.

A longitudinal canal extending from the esophagus to the pylorus on the inner surface of the stomach following the lesser curvature.

In the skull, a thin vertical canal between the nasal surface of the maxillary bone and the perpendicular plate of the palatine bone that contains the greater (anterior) and lesser (middle and posterior) palatine nerves and the greater and lesser palatine vessels.

In compact bone, tiny canals in the center of concentric cylinders of mineralized tissue. Nerves and blood vessels run through these channels, all of which interconnect. Each Haversian canal is the center of an osteon.
SEE: bone; SEE: Havers, Clopton

A canal in the vitreous body of the eye, extending from the optic papilla to the central posterior surface of the lens. It serves as a lymph canal. In the fetus the canal contains the hyaloid artery. This normally disappears 6 weeks before birth.

A canal in the skull, just above the foramen magnum in the occipital bone, through which the hypoglossal nerve and a branch of the ascending pharyngeal artery pass.
SYN: SEE: anterior condyloid foramen

An anterior-posterior bony canal in the floor of the orbit. The infraorbital artery and nerve run in this canal, which opens anteriorly as the infraorbital foramen.

A canal made of the transversalis fascia and the aponeuroses of the abdominal wall muscles just above the inguinal ligament. The inguinal canal is a cylindrical passageway 4 cm long from the retroperitoneal space to the subcutaneous fascia. It begins at the deep (internal) inguinal ring inside the abdominal wall, approx. halfway between the anterior superior spine of the iliac bone and the pubic symphysis, 0.50 in (1.25 cm) above the inguinal ligament. It continues downward and toward the midline, and it ends at the superficial (external) inguinal ring under the skin at the pubic crest. The inguinal canal contains an outpouching of the peritoneum, blood and lymph vessels, and the ilioinguinal nerve. In males, it contains the spermatic cord; in females, it contains the round ligament of the uterus. 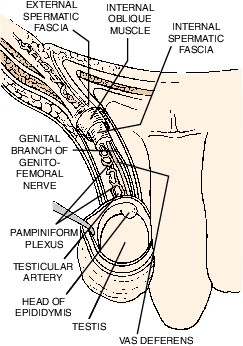 The canal in the petrous portion of the temporal bone through which the vestibulocochlear and facial nerves exit the cranial cavity.
SYN: SEE: meatus acusticus internus

The alimentary canal from the stomach to the anus.

The final segment of the mandibular canal, containing the nerves and blood vessels for the lower incisors and surrounding gums.

The marrow canal of long bones.

A small bony canal in the skull inside the medial wall of the orbit between the lacrimal bone and the maxilla. Its top opens into the nasolacrimal fossa, its bottom into the nasal cavity under the inferior nasal concha. It contains the membranous nasolacrimal duct, which drains tears from the eye.
SYN: SEE: lacrimal canal

A temporary canal in the vertebrate embryo between the neural and intestinal tubes. It is the temporary communication between cavities of the yolk sac and the amnion.

A tiny tubular canal in bone, filled by vessels and nerves running to and from the osteons and the other basic metabolic and growth units.
SEE: bone

In the skull, a roughly spherical canal through the lesser wing of the sphenoid bone connecting the middle cranial fossa and the superior-medial edge of the back of the orbit. The optic nerve and the ophthalmic artery pass through the optic canal.
SYN: SEE: optic foramen

A canal between the sphenoid and palatine bones that transmits branches of the sphenopalatine vessels.

A tubular canal extending ventrally and laterally from the coelom inside each half of the embryo and destined to form the pleural cavity for the lung.
SYN: SEE: pericardioperitoneal canal

The connective tissue (a continuation of Glisson capsule) and its vessels (interlobular branches of the hepatic artery, portal vein, and bile duct and lymphatic vessel) located between adjoining liver lobules.

A canal between the maxillary and palatine bones that transmits the descending palatine nerves and artery.

A canal inside the obturator fascia along the lower pelvic surface of the internal obturator muscle and running along the inner lower edge of the ramus of the ischium. It contains the pudendal nerve and the internal pudendal vessels.
SYN: SEE: Alcock canal

The canal inside constricted region of the pyloric segment of the stomach that opens through the pyloric sphincter into the duodenum.

1. The canal inside the tooth that extends from the pulp chamber to the apical foramen. It contains arteries, veins, lymphatic vessels, and sensory nerve endings.
SYN: SEE: pulp canal
2. Colloquially, the procedure for preserving a tooth by removing its diseased pulp cavity.

The continuation of the vertebral canal into the sacrum.

One of the three perpendicular canals, each forming two-thirds of a circle, that extend from the vestibule of the labyrinth in the inner ear. The semicircular canals are the bony shells that contain the similarly shaped semicircular ducts, membranous sensory organs that detect the angular acceleration and the orientation of the head.

The continuous canal through the central foramina in the vertebrae, which contains the spinal cord and the spinal nerve roots in their meningeal coverings.
SYN: SEE: vertebral canal

The cavity of the uterus.

The cavity of the cervix of the uterus.

The combined cavities of the uterus and vagina.

The cavity of the vagina. The vaginal walls can expand but are normally in contact with each other; thus, this cavity is a potential space.

canal is a sample topic from the Taber's Medical Dictionary.