1. A flat or relatively smooth surface.
2. A flat surface formed by making a cut, imaginary or real, through the body or a part of it. Planes are used as points of reference by which positions of parts of the body are indicated. In the human subject, all planes are based on the body being in an upright anatomical position. 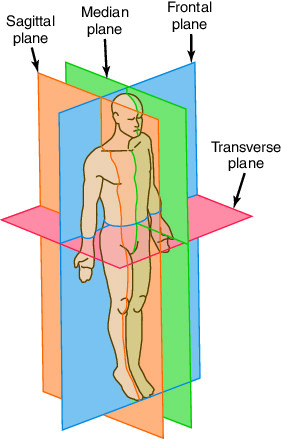 BODY PLANES ; SEE: anatomical position
3. A certain stage, as in levels of anesthesia.
4. To smooth a surface or rub away. 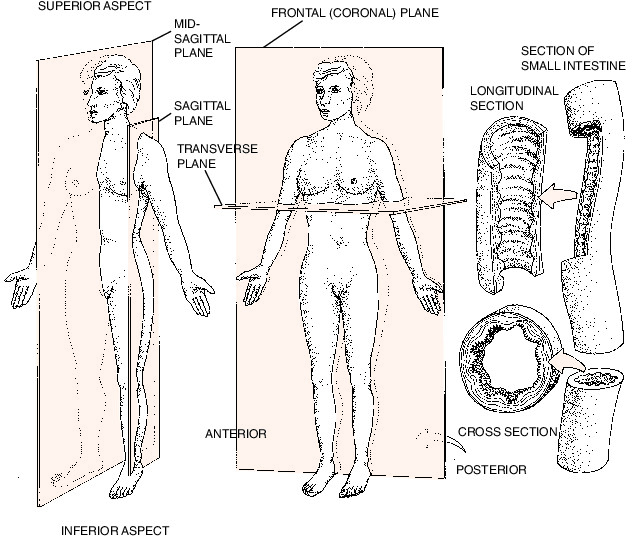 A plane tangent to the alveolar point with most prominent points on lower aspects of condyles of the occipital bone.

A plane that passes through an incisor or canine tooth parallel to the long axis of the tooth and in a labiolingual direction.

A plane that passes through a tooth parallel to the axis and in a mesiodistal direction.

A plane formed by the biting surfaces of the teeth.

The fourth parallel plane of the pelvis.

A vertical plane at right angles to a sagittal plane. It divides the body into anterior and posterior portions.
SYN: SEE: frontal plane

An assumed horizontal plane from which craniometric measurements are taken.

One of two planes through the anterior and posterior principal foci of a dioptric system and perpendicular to the line connecting the two.

A transverse plane at right angles to the vertical axis of the body.

inclined planes of the pelvis

Anterior and posterior inclined planes of the pelvic cavity, two unequal sections divided by the sciatic spines. In the larger, anterior section, the lateral walls slope toward the symphysis and arch of the pubes; the posterior walls slope in the direction of the sacrum and coccyx. The anterior inclined planes are the declivities over which rotation of the occiput takes place in the mechanism of normal labor.

inclined plane of a tooth

Any sloping surface of the cusp of a tooth.

A horizontal plane passing through the tubercles of the crests of the ilia; lies approx. at the level of the fifth lumbar vertebra.

A vertical plane through the trunk and head dividing the body into right and left halves.
SYN: SEE: midsagittal plane
SEE: plane for illus.

An imaginary plane extending from the incisal edge of the incisors along the tips of the cusps of the posterior teeth to contact the cranium. Although not a true plane, it represents the mean of the curvature of the occlusal surface.

parallel planes of the pelvis

planes of the pelvis

Imaginary planes touching the same parts of the pelvic canal on both sides.

A plane passing through a refracted ray of light and drawn perpendicular to the surface at which refraction takes place.

A plane through the fovea of the eye; fixation point.

The angle of the scapula in its resting position, normally 30° to 45° forward from the frontal plane toward the sagittal plane. Movement of the humerus in this plane is less restricted than in the frontal or sagittal planes because the capsule is not twisted.

A horizontal plane passing through the lowest points of the 10th costal cartilages. It lies approx. at the level of the third lumbar vertebra.

A plane that divides the body into a top and bottom portion.

Any body plane perpendicular to a horizontal plane.

A plane passing the visual axis of the eye.

plane is a sample topic from the Taber's Medical Dictionary.